Must Watch Films About Kindness

Being kind is cool. No ifs, buts or maybes about it. So cool in fact that the film industry has made a bunch of great movies celebrating it. Here’s five of our faves…

When 11 year old Riley has to pack up her life and move across the country to San Francisco with her parents, the world as she knows it turns upside down and inside out (get it!). She and her five core emotions - Joy, Anger, Fear, Disgust and Sadness - have to navigate this new life, school, friendships and more. Ultimately, it’s a film all about being kind to yourself, taking a look at the nature of your emotions, realising that happiness is not just about joy, embracing all your feelings, and listening to what your mind and your heart are saying. Grab some popcorn and give yourself a real big hug...

Wonder tells the story of ten-year-old Auggie, who has a rare facial condition called Treacher Collins Syndrome. Up until now, Auggie had been homeschooled, but when fifth grade rolls around, his mum decides it’s time that he goes to the high school with everyone else. Being at school for the first time can be hard enough, but for Auggie, it proves to be even harder when people stop, stare, and say things about his facial differences. The film really deep dives into what it means to be kind, acceptance, tolerance, and how small acts of kindness can make a literal world of difference.

Schindler’s List is based on the true story of Oskar Schindler, a German member of the Nazi party who tried to save his Jewish employees after witness the persecution of Jews in Poland. The film really highlights the battle between good and evil, the true horror of the Holocaust, and the incredible fight that people had to put up to survive it. As the film goes on you see Schindler’s indifference to Jews turn into compassion, and a need for change. He understands that having an open mind, strong will, and a strong heart can save lives. Maybe grab some tissues for this one…

In 1971 in Virginia, USA, the community of Alexandria is torn apart by racial discrimination and hatred. When the local high school is integrated for the first time, and an African-American is hired as head coach of the football team, there is a lot of resentment and outrage - some white players even pledge to boycott the team unless their old white coach doesn’t get reinstated, and new Coach Boone is told that if the team lose even one match, he’ll get fired. The film looks at how similarities, respect and kindness are more than skin deep, that friendship overcomes prejudice, that teamwork makes the dream work, and that change is inevitable.

All seven-year-old Olive wants to do is take part in the Little Miss Sunshine beauty pageant and do a dance that her beloved grandpa has taught her. When she gets a spot in the competition, her whole family jumps into an old VW bus for the two day journey. So many shenanigans happen within those two days, from doors falling off the vehicle, her brother having a revelation that could change his entire career projection, and a shocking family event that changes everything. The film isn’t shy to highlight sadness and dysfunction alongside utter joy and hilarity and shows that a little bit of shine, a whole load of kindness, and being comfortable in your own skin, exactly as you are, is the most important thing.

Are you a channel hopper or a series master? Find out with our quiz! 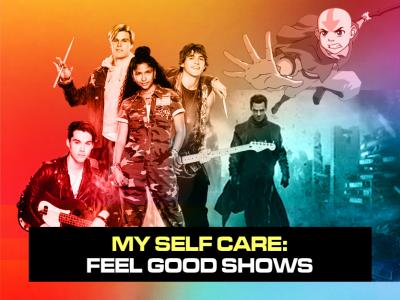 Clary shares her top films and series to boost endorphins and make you feel good...

For every show that fails to represent the LGBTQ+ community in all its glory, there’s another getting it right. Here’s our ode to the films and TV shows revolutionising our screens.