Are New Year Health Kicks Worth It?

Every January, millions of people all over the world decide to make New Year's resolutions, and one of the most popular ones is to exercise more. Working in a gym, I see the most new members signing up in January, and inevitably the most cancellations occur in February. However, despite the fact that many people do not complete their aims, I believe that making resolutions for a healthier life in January is definitely worth it.

The possibility of finding a form of exercise that you love is worth failing 100 times. You don’t lose anything when you fail, the healthy habits you started still had a positive impact on your body and mind. And working towards your goals will give you a sense of achievement and can really improve your mental state. If you stick to your resolution for one week you will feel more confident and you will get more motivation to carry on.

The concept of January being a ‘fresh start’ is common and can help many people start new habits. However, it can do the opposite and limit people as they will decide on a goal to achieve then wait until January 1 to start. The main reason I think making New Year’s resolutions is good is that making goals and working towards them is great, although it can happen at any time of year, not just the first day of January!

One of the most common arguments against making New Year’s resolutions is that many people do not stick to them, so some people see them as pointless. This doesn’t really make sense though, because if someone aims to go to the gym twice a week, and does that throughout January, and then, when it gets to February they forget to go as much, they have still exercised a lot more than they would have. Just because someone doesn’t completely succeed at a big goal it doesn't mean that they have failed!

Deciding a new goal for a new year is also good because it encourages people to try new things. For example, someone may decide to go for a run every day then find that they prefer cycling so change to that and go out every morning on their bike instead. For those who discourage people from making resolutions, this kind of thing could be counted as a failure, however it is clear that that is not the case. In my opinion setting vague goals can actually be better than very specific ones. So instead of saying ‘I am going to read 24 books this year’, something like ‘I will read more books that I enjoy and not feel pressure to finish a book if I’m not enjoying it’ is better as it allows for more changes and is therefore easier to achieve.

If you have made a goal this year to exercise more, here is some advice on how to keep motivated:

So, Happy New Year! Make a resolution, try to stick to it but don’t worry if you can’t. They are definitely worth a try as long as they don’t cause you stress.

This year I am going to try and do some form of exercise at least twice a week. I might stick to it, or I might fail after one month. But I will be happy if I spend a month doing more activity than I normally would. 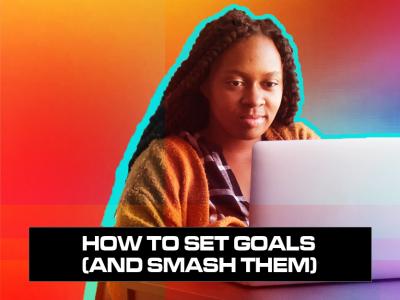 How To Set Goals (And Smash Them)

Check out our top tips on setting manageable goals every month.