6 Black Creators You Need To Know

If you’re looking for some inspiration, advice, something to binge, or just some fun on your feed, look no further! Here are six Black creators you need to know, follow and love…

Joe, Raven and Sam are three best friends from East London who like comics, movies and console gaming. After finding it difficult to talk about these things with their other friends, the three came together through a Facebook page and the rest is history! They quickly decided to create a platform to connect with as many ‘nerds’ as possible, those who felt alone in the world when it came to talking about and expressing their passions for ‘the nerd culture’. Turns out, there were loads. 165,000 people and counting in fact! The boys’ YouTube channel is massively popular and gives them a space to review movies and tv shows, react to new trailers and generally chat about everything they love, to a community around the world.

By day, Amina is a scientist, lecturer and teacher. By night, she’s a YouTuber with 147k followers, making videos to help students graduate and diversify the face of academia. She shares videos with tips on productivity, habit forming and optimal thinking. And she also founded the academic platform The Page doctor, where she connects PhD researchers to university students to support them with their academic needs!

King Jae started his content creation journey back in 2007, filming videos for up-and-coming artists like Dave, Stormzy, Krept and Konan, and J Hus. He made a move into gaming in 2015 and has since become a pro fighting game player, with a YouTube following of 59,000. He travels the world to take part in competitive gaming tournaments, teaches people how to play fighting games, films game reviews and even does some day to day vlogging too.

Victoria was just like any other teen in Ireland, until last year, when she became a TikTok sensation. Downloading the app (like everyone else!) during the COVID-19 pandemic, Victoria quickly became obsessed with posting videos and it paid off. She gained traction super fast and now has over 15 million followers. Her short comedy sketches usually focus on life with her parents, her teachers, her Nigerian heritage and relatable lols. She’s so popular that TikTook megastars Addison Rae and Dixie D’Amelio follow her!

Ehiz is the king of reactions on TikTok. He shot to fame on the app with his quick, hilarious duet videos, simply reacting in an over the top way to other people’s content. He’s got 10.7million TikTok followers, and has also started his own YouTube account where he reacts to other videos, uploads long day-in-the-life style vlogs and does storytime videos for his 49.4k followers.

Jessica is a British home baker, who owns her own cake making business and creates content for TikTok. From recipes to baking FAQs, inspiration to tips, and just good old montages of delicious treats, Jessica’s channel is definitely one to make you happy, hungry, and ready to get making. With 301,000 followers, she definitely knows how to cater to a lot of people and keep them coming back for seconds! 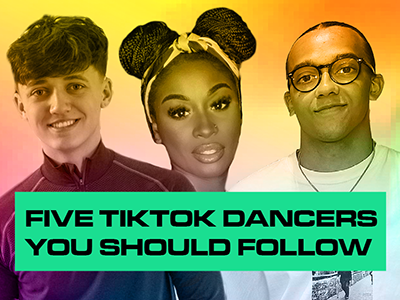 Celebrate the joy of dance with these accounts!